http://www.itmedia.co.jp/games/gsnews/0 ... ews04.html
http://www.video-fenky.com/pix/snk.jpg
"As reported earlier, SNK Playmore officially announced a slot machine themed after Metal Slug at a hotel in Tokyo today. The company also revealed its business development plans for the short term.
According to Koichi Sotoyama, director of the company, SNK Playmore "will actively use the technology and know-how it cultivated via games in the fields of slot machines and pachinko. We will develop our business in new areas in an attempt to become a general-entertainment firm." The statement was part of his company's business strategy for the current term.
Especially worth paying attention to was the explanation that the company "is moving its core business focus from games to pachinko/slot machines... in particular, we will concentrate our business investment on the quickly growing and highly profitable business of slots."
As part of this new core focus, the company plans to develop five slot machines within the current fiscal year ending July, 12 more in the July 2005 fiscal year, and 15 in the 2006 fiscal year. The theme for their first machine is based on Metal Slug, but the company plans to use famous game titles from other companies as well for future slot and pachinko machines.
As for the game business, Sotoyama said that SNK Playmore will continue to release popular series like KOF and Samurai Spirits on multiple platforms, including arcades and portable phones. The company is also considering the development of slot-machine simulator software for game consoles. It's all part of an effort to succeed as a "general entertainment firm" through the development of new businesses, including the use of slot/pachinko knowhow in the overseas (European) gaming industry 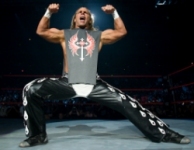